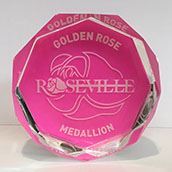 The first clue for the Golden Rose Medallion Hunt will be released at 6:50 p.m. at the Frank Rog Amphitheatre in Central Park on June 23. Additional clues will be released each day at noon on the Medallion Twitter account at @RVMedallionHunt. Clues will also be available at City of Roseville facilities and at cityofroseville.com/3494/Golden-Rose-Medallion-Hunt until the medallion is found.

Thank you to our amazing sponsors!!! (more to come)