Anti-Icing
Roseville is working to stop the ice before the storm begins - introducing an anti-icing method to help keep roads safe when freezing drizzle or light snow is predicted.

Roseville crews are applying liquid anti-icing chemicals to improve winter driving conditions. Anti-icing is most often done the day before a light freezing drizzle, frost on bridge decks or light to moderate snow events. It is useful at specific pavement temperatures when a bond between ice and the pavement is most likely. 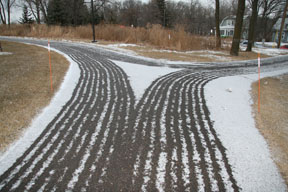 Anti-icing is a tool to maintain better road conditions, but it does not replace road salt, especially during freezing rain or blowing and heavy snow events.

Goal of Anti-Icing
The goal of anti-icing is to prevent or reduce the bond of snow and ice to pavement, reducing the need for granular deicing products to break that bond after the event. This is done by spraying salt brine on the roads before it starts snowing; the brine dries on the surface and then is rehydrated when precipitation begins. Liquid application makes it possible to apply a small amount of salt to the road, typically around 60 to 70 pounds per lane mile, whereas granular products are often applied at 400 to 600 pounds per lane mile. With a smaller bond between the snow and roadway, plows can remove more snow from the road and apply less salt after the plow. Additional benefits include less frost on bridge decks and increased traction on brine-treated roads for longer periods of time, especially in light snow events.

Anti-icing products are applied in bands to ensure that motorists do not experience reduced traction while the chemicals are being applied, leaving a distinctive striped look on the roadway.

Chemical Makeup
While salt in 23% water solution is the most commonly used chemical, additions may include calcium or magnesium chloride to lower the practical working temperature, or organic additives like beet juice or corn syrup to reduce corrosiveness and increase adhesion to the road surface.

Where It's Used
Roseville maintenance workers are using anti-icing on bridge decks, in hilly areas (especially near intersections), on roads with sharp curves and on roads with new pavement. Approximately 12 lane miles of roadway are treated by city crews before a storm. This will likely increase as capacity for the technology increases.
More
[]