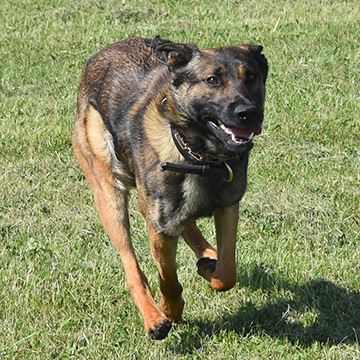 Meet Soyer
Soyer is a Belgian Malinois/German Shepherd from Hungary. He was born in January of 2020 and came to Roseville when he was just nine months old.

Soyer is a high-drive, high-energy dog that is very social. Being so young when he arrived to begin training, he still has plenty of puppy energy and loves to play and socialize with people. Soyer loves to work and knows when it is time to focus on work and do the job that he was trained to do.
About Officer Dickens
Soyer’s handler is Officer Mitchell Dickens. Officer Dickens has been with the Roseville Police Department as a sworn officer since October 2015.

Officer Dickens began his law enforcement career with RPD as an intern during his junior year in college at Minnesota State University - Mankato. He fell in love with the department and the community during that time and knew that Roseville was the place he wanted to work.

Officer Dickens has had a fascination with police K9s since childhood. Few officers get the opportunity to become a handler during their careers and he feel fortunate to be a K9 officer.

For Officer Dickens, being a handler is much more than just being able to have a dog with him at work. The responsibilities, trust, time and effort that is put into the dog is something he takes very seriously. He is proud of the organization and process that allowed him to take a young dog with no understanding of basic commands through a four-month training and emerge certified to work the streets. 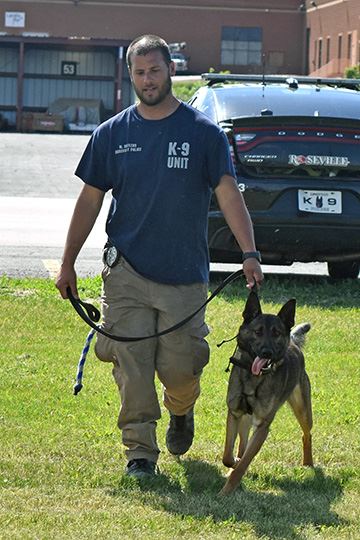 Officer Dickens says...
The amount of effort, patience and understanding that both Soyer and I exhibited during school helped build a special bond between us. Soyer brings a level of comfort when he is on the street, not only to me, but also my partners.

Having a dog in the back of the squad is a valuable tool for patrol related tactics and also bridging the gap within the community we serve. Soyer is a great conversation starter and ice breaker for those who may be hesitant to come and speak with us. I look forward to my career with Soyer and watching him grow as a police K9.
More
[]